﻿Connect with the sacred art of Buddhism through the creative act of coloring. Buddhist art is rich with symbolism and meaning. Taking the time to color and interact with these symbols and motifs is a simple yet profound way to practice mindfulness and move closer to a greater awareness of one’s own essential nature. The drawings here—all meticulously painted by hand with a small sable brush—relate to the state of being completely awakened and evoke a deep sense of calm and stillness. A concise description of each drawing unravels the many layers of meaning contained within this sacred art, inviting a deeper connection with these drawings. 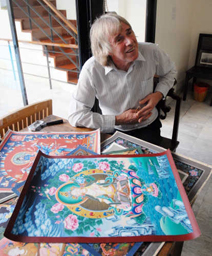